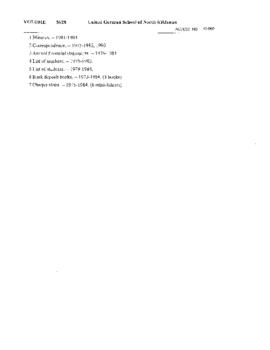 The United German School of North Kildonan operated Saturday German School program until the end of May 1984, when the four supporting Mennonite congregations (North Kildonan Mennonite Brethren, North Kildonan Mennonite, Springfield Heights Mennonite and Douglas Mennonite) agreed to officially close the school and dispose of all its assets. The strong and successful English-German Bilingual Program offered by the Rivereast School Division in the Princess Margaret and Donwood Schools, and the deceased enrollment in the Saturday school program precipitated this decision. German schools in one form or another had been a popular institution in North Kildonan for over 50 years.

Arnold Janzen, last treasurer, gave these materials to Hans Funk, who delivered them to the Mennonite Heritage Centre together with the North Kildonan Funeral Society Records.

This fonds consists of minutes, correspondence, annual financial statements, lists of teachers and students, and detailed financial information for the years just prior to is closing and the dispersement of its assets.