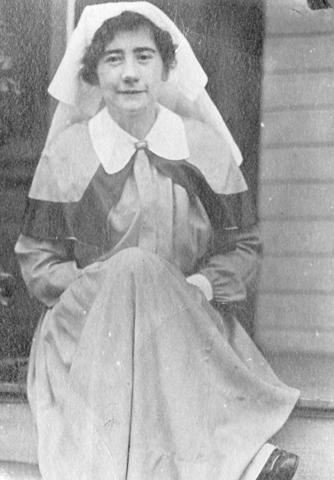 Ruby Belle Dickie was born in Saskatchewan on July 29, 1890 to James Hay Dickie and Elizabeth Mitchell Clinkskill. Ruby Dickie moved to Winnipeg at a young age and graduated from the Winnipeg General Hospital School of Nursing in 1916. Immediately after graduation, she went overseas to serve in the First World War. By the end of the war, she was stationed in Amara, Mesopotamia. Upon her return to Canada, she got a position with the Provincial Board of Health and was transferred to Brandon in 1925. In 1936, she was honoured by King George V during his Jubilee. Miss Dickie passed away on March 20, 1981.

The records of Ruby Dickie came to the archives/museum of the Winnipeg General Hospital/Health Sciences Centre Nurses Alumnae Association as part of a transfer of records from A. Kaye and Ruby Dickie.

See also Accession 2003.4.31 for other material pertaining to the wooden medicine chest.

The information file for the 1916 Graduation Class also contains references to Ruby Dickie.

Artifacts are described separately and are accompanied by photographs.