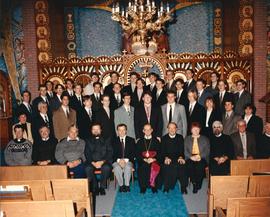 The fonds consists of textual records, photographs and artifacts from A.E. McKenzie Seed Co. Ltd. The textual records include minutes, documents, financial records, administrative records, by-laws, legal records, catalogues, sales literature, seed packets, newspaper clippings, appraisals, publications, scrapbooks and miscellaneous sections. In addition, some of the records within the fonds relate to the operations of McKenzie subsidiaries -- Brett-Young Seeds, Steele-Briggs Seeds, Pike & Co. and McFayden Seeds -- and various properties owned by McKenzie Seeds. There are approximately 500 photographs that depict the operations and employees of McKenzie Seeds and the seed industry in general. The artifacts include blueprints, newspaper clippings, copper printing plates, seed bags and plaques. As well, an artificially created series of records dealing with Brandon College Inc., the McKenzie Foundation, the Brandon Allied Arts Council and the Brandon Board of Trade has been created within the fonds but identified as records outside the provenance of the McKenzie Seed Co. Of particular interest within the textual records are the transcripts of various features of the company's history as dictated, researched and remembered by its second President/General Manager, J. Lasby Lowes. The fonds also contains an almost complete catalogue collection with high production values. Outside of the seed industry, the records dealing with both Brandon College Inc. and the McKenzie Foundation are significant pieces of the history of Brandon College/University and the City of Brandon. Within the photograph collection, the pictures of the McKenzie Strike of 1944 are worth mentioning; aside from these photographs there is no record within the fonds that mentions the event. The photographs depicting the operations and workers of McKenzie Seeds, both in the plant and in the field are also noteworthy, as are the product production photos, as they provide a visual history of agriculture and the seed industry in Western Canada.

The Alexa Mezincescu fonds includes an excerpt from a souvenir programme (1970-1971) and a newspaper article (1970).