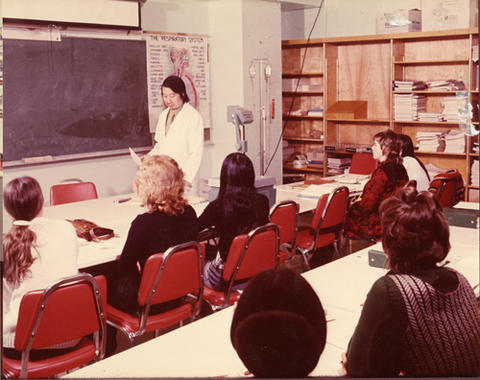 The continuing education of nurses beyond the School of Nursing has a long tradition. Before the creation of HSC there were various opportunities at Winnipeg General Hospital for graduate nurses to improve their skills or specialize in emerging fields.

Post Graduate courses in Obstetrics were available for nurses in 1950 whilst the Operating Room Techniques course was added in 1953. The Nursing Faculty of the School of Nursing provided nursing education on an ad hoc basis until Dorothy Dick was appointed Clinical Co-Ordinator in 1958, with the responsibility for the establishment of formal Inservice Education.

Major changes occurred in 1965 with both the reorganization of Inservice Education to include Orientation (for new and returning staff members); Skill Training, Programs, Manual and Behavioral courses; Continuing Education courses and Leadership and Management Development courses (WGH Annual Report 1965, page 32) , as well as the establishment of a special lecture series for nurses in Intensive Care. By November 1966 an Advanced Course in Intensive Care Nursing (see Series 2) was being offered to Registered Nurses, Licensed Practical Nurses and Nurse Technicians. By 1968 the Intensive Care course was under the jurisdiction of Nursing Services.

At the time of creation of HSC in 1973 the Department of Nursing was responsible for various services including Inservice Education (see Series 6) and Nursing Services (ICU Nursing Course, the Coronary Care course and the Dialysis Unit). By April 1975 HSC had recognized a need for an Emergency Nursing Course (see Series 7) providing post-basic nursing education for recognized graduates to become more familiar with the work of the expanding Emergency Department.

In 1981 the first Neonatal and Pediatric Critical Care Nursing Program (NPCCNP) (see Series 3) was offered through the Department of Nursing; this was cost shared by the federally funded Canada Employment and Immigration Commission from 1983 until 1985. In 1985 the province took over funding of the program. That same year HSC also established the Manitoba Renal Nursing Program (see Series 8) in partnership with St. Boniface General Hospital.

Building on the post-basic Intensive Care Nursing program at HSC (including an affiliation with St. Boniface General Hospital from 1975 – 1980) the Collaborative Adult Intensive Care Nursing Program (AICNP) (see Series 4) was developed by HSC in partnership with St. Boniface and University of Manitoba in 1988. The following year they added the Advanced Clinical Practicum requirement to the Collaborative AICNP.

Dr. Joan Jenkins was appointed Director of Nursing Education and Research in 1989, Inservice Education was merged with Nursing Services and a new Department of Special Programs (later “Specialty Programs, Nursing Education.”) was established (see Series S5). This brought together the post-basic nursing programs of AICNP, NPCCNP, the Nephrology (Renal) Nursing Program, and the Emergency Nursing Program. The Midwifery Upgrade Program was added in 1999. Other educational opportunities were offered as part of “Educational Services.” The last AICNP class graduated in 2008.

In 1998 MARN awarded a grant to HSC Specialty Programs to begin the process of developing an Internet based program, the WebCT course was piloted in 2000 and offered in the Spring of 2001.

Nursing Innovation and Research was renamed Clinical Education when Jannell Plouffe was appointed Director in November 2010. The merger of Nursing Research and Nursing Education did not continue although Jannell was the Director and Chair of the Evidence Based Practice Committee. When she retired from the position in 2016 Clinical Education was integrated into Central Services Support.

Original overhead projection transparencies were destroyed after photocopies were created. Original manuals have been destroyed with the covers photocopied and kept for reference. Preservation copies of faded mimeographs made.