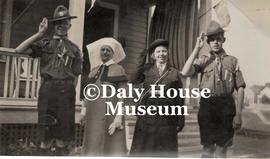 Photograph of Benvenuta (Nutman) Peirson & her children Charles, Dorothy and John. Benvenuta Peirson is dressed in her Queen Alexandra Imperial Military Nursing Sisters uniform; the children are dressed in their boy scout and girl guides unif...

The fonds contains all records pertaining to both the Winnipeg General and Health Sciences Centre Schools of Nursing including lists of enrolees, student time books, notes, and handbooks, teaching materials, examination results from the first quar...