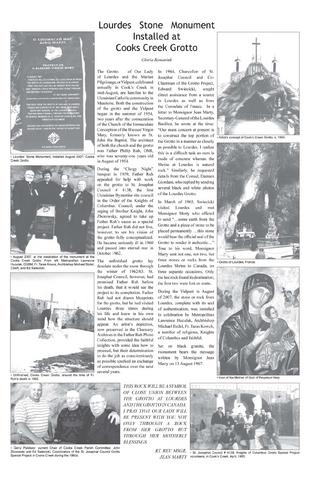 Born in Winnipeg, Manitoba, October 16, 1950, Gloria Romaniuk moved with her husband, Greg Stanwick, to Cook’s Creek, Manitoba in 1976, to operate Cook’s Creek General Store. Romaniuk grew interested in the life and works of Rev. Philip Ruh, OMI in 1982, as a result of repeated attacks of vandalism at the site of the Ukrainian Catholic church and grotto in Cook’s Creek, built by Rev. Ruh. In 1983 she launched and coordinated the “Ruh Project”, an effort to document Ruh’s life and works. Together with Olly Charney, Romaniuk located materials which had been created by, or belonged to Ruh and produced more than seventy audio interviews with individuals who knew or worked with Ruh. She wrote a local history pamphlet for Cook’s Creek church, edited the translation into English of Ruh’s autobiography "Missionary and Architect (Autobiography)", and wrote several newspaper and magazine articles. She has served as the Ukrainian Catholic Archeparchy of Winnipeg Archivist since 2003. Included in the Romaniuk fonds is primary research material relating to Ruh.

Copyright on this image belongs to the Ukrainian Catholic Archeparchy of Winnipeg Archives. Researchers are responsible for observing Canadian copyright regulations.