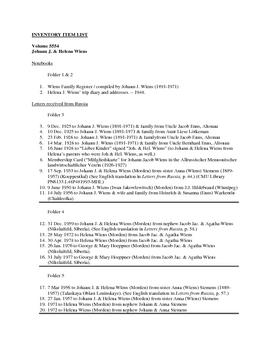 The materials in this fonds were preserved by various children of Johann J. and Helena Wiens, such as Mary Hoeppner, Justina Peters, Erna Bergmann, John M. Wiens and others.

This fonds contains mainly letters received from siblings who remained in the homeland (Russia/Soviet Union) written in the post-revolution era, after Johann J. and Helena Wiens immigrated to Canada. The letters describe experiences of family, exile and complete disruption of their way of life as the communist regime developed. There is a 19-year period of no letter exchange beginning in 1937 when Stalin initiated an horrendous purge of anyone that might be a threat to his regime. After Stalin's death, things began to change slowly, and starting in 1956 contact was again established and another series of letter were exchanged. This fonds includes letters which Johann received from his sister Anna Siemens, his brother Jacob's family, his brother Peter Wiens and his sister Liese Letkemann. There are also some letters from relatives, David and Justina Kasper, Gertrude (Enns) Regehr and others. In addition to the letters from Russia, this fonds also contain two notebooks -- one consisting of the Wiens family register compiled by Johann J. Wiens, and the other a 1948 trip diary and address book created by Helena Wiens.

Some letter is German Gothic script