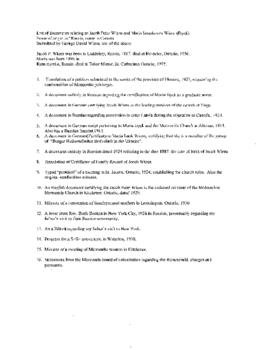 Jacob Peter Wiens (1887-1936) was born August 23, 1887 to Peter Wiens (1859-1923) and Anna Boese (1864-1930) in Ladekopp, Molotschna Colony, South Russia. He was the second of 10 children born to Peter and Anna Wiens. Jacob was baptised on July 8, 1908 in Lugowsk, Samara. Jacob P. Wiens married Maria Dyck (1895-1976) of Altonau, Samara on September 13, 1920. They had six children. Wiens was the leading minister of the Tiege Mennonite Brethren church by 1924. In the same year the family immigrated to Canada and settled in the Kitchener, Ontario area. In Canada, Jacob was one of the founding leaders of the Molotschna Mennonite Brethren Church (later known as the Kitchener Mennonite Brethren Church. In 1926 he attended a Russian Baptist conference at Peabody, Massachusetts. Jacob Wiens died after an accident on November 13, 1936.

These materials were in the hands of the family and sent to historian John B. Toews by Jacob’s son George Wiens in October 2011. Toews passed them on to the Mennonite Heritage Centre in February 2012.

This fonds consists of Jacob Wiens’ travel documents, minutes and reports of church related meetings, and some identification documentation related to Peter and Maria in Russia.