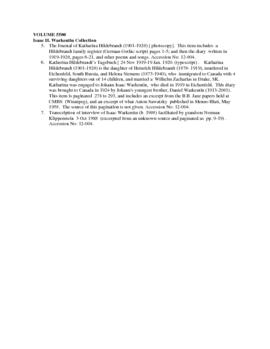 Isaac Warkentin was born June 10, 1936 in Steinbach, Manitoba as the 4th child of 8 children, to parents Isaak Warkentin (1908) and Maria Hiebert (1909-1985), Mennonites that had immigrated to Canada from Russia in 1924. For over 20 years he worked as the General Civic Construction Superintendent with Manitoba Power Commission / Manitoba Hydro. He was married in 1959 to Elvira Maschke (1938), who had immigrated to Canada from Volendam, Paraguay in 1950. They were members of the Sargent Avenue Mennonite Church in Winnipeg. Ike, as he was commonly called, and Elvira had three children -- Theodore, Robert and Veralyn. Ike Warkentin died in Winnipeg on 11 July 2010.

Ike Warkentin presumably received items in this collection from his father and uncle, who brought them to Canada from Russia in 1924.