The series contains petitions, media releases, newspaper clippings, appeal letters, pamphlets, correspondence, and various documents relating to religious oppression and violation of human rights in Ukraine under the Soviet regime. Many of the petitions and appeals are to the United Nations, written by Congress representatives between 1967-1993.

Series consists of papers relating to the conferences of the Synod of Bishops, primarily in Canada, to discuss issues arising from larger discussions at Vatican II level. Metropolitan Maxim's papers were generated to a great extent at the gatherings of the Western Canada Bishops' meetings, though some of the material covers meetings of bishops from across Canada, from the US, and other countries. The material is correspondence, meeting agendas, minutes, and reports from the Western Canadian Conference of Bishops, the Canadian Catholic Conference of Bishops, and Synods Episcoporum. 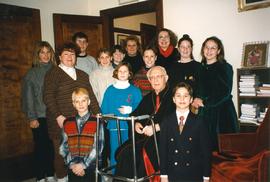 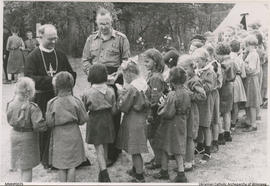 Reverend Maxim Hermaniuk and a PLAST leader chat with a line of young female Plastoons, summertime c.1947, in an unidentified location.

Reverend Maxim stands in a garden of flowers in this black and white print which is identified in his hand at the bottom of the front of the photo. He has written in Ukrainian: "Father Maxim Hermaniuk, CSsR, Louvain, Belgium, 1947". Oversized.