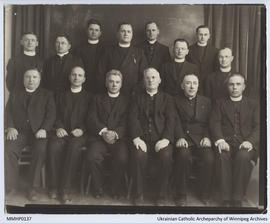 The series is comprised of papers from Metropolitan Maxim's service in Belgium after the Second World War as the only Ukrainian Catholic chaplain dedicated to the Ukrainian refugees. His love of learning and his great concern for students compelled him to help launch the students' organization, Obnova, and to help young people enter the University of Louvain through a scholarship and bursary program.