This fonds includes the personal papers of Peter Paetkau such as the journals he kept from 1961-2007, his autobiography entited "Seasons of my Life", letters received, sketches drawn, poetry and letters written. There are genealogical files and articles he wrote on family history. There are also files which document his involvment with organizations such as the Mennonite Literary Society, Parallel Press Club and the Winnipeg Bach Festival. There are photographs and sound recordings that document historical events and institutional life such as concerts, graduations, openings, recitals, lectures and anniversaries. 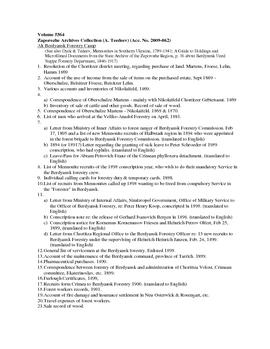 This fonds consists of a set of personal journals from 1936 to 2011, which records people that visited, places she visited and the activities of those she lived close to. There is also a series of notebooks containing personal notes, sometimes attending to loved ones who were in the last days of life in the hospital. Contained in this fonds are also some items which she acquired from her father, mother, sisters and brothers, as well as some person memorabalia like a recipe book, book of her school art work and the record of her baptism. A significant item is the friendship book started by her grandparents, Jacob J. and Elizabeth Loewen, which contains birth, marriage and death dates of many friends and family members. The fonds also contains several hundred letters which she received from her parents, siblings and friends.

The House of Heinrich [Epp] collection

This collection contains the correspondence collected by Anna Epp Ens in conjunction with a number of Epp family reunions and the publications associated with this family. In 1975 the descendants of Heinrich Epp (1811-1863) met at the International Peace Gardens and Camp Koinonia south of Boissevain, Manitoba. Out of this gathering grew the request that a book be compiled and published. Anna Epp Ens took up the task supported by a book committee, which led to the publication of the book "The House of Heinrich: The Story of Heinrich Epp..." The collection also includes the photographs that were collected (and published) as well as files related to publishing a newsletter and organizing subsequent reunions, and the update of data distributed on a CD ROM in Brother's Keeper Format in 2010.

This fonds consists of family documents, unpublished genealogies, a computer database and 83 photographs. Many of the genealogies are computer generated reports based on data that Ed Schellenberg collected and compiled for himself and others interested in Mennonite family history. Some of surnames of the families he researched included Schellenberg, Rempel, Braun, Barkman, Falk, Schlabach, Warkentin and Reimer.

This fonds consists primarily of Betty Newfeld’s activities after her retirement. This includes written works such as memoirs, poetry, short stories, and genealogy focusing on Niverville, Manitoba and other Manitoba locations, the Neufeld family and other experiences from her life. A small amount of material deals with her activities as an artistic painter which she carried on beside her career. While she was not closely connected to a Mennonite church this material shows the connections she made with history, including her own Mennonite past, after her retirement.

This fonds consists of a sampling of key documents which Ike Froese preserved from his life’s passion and work related to how he worked within the Mennonite Church to relate and minister amoung North American aboriginal people. Correspondence, news clippings, and research papers are found in this fonds. The files include information on the history of Mennonite Pioneer Mission and Conference of Mennonites in Canada Native Ministry programs, especially from 1970 to 1980, but also there are a few documents from the 1980s and 1990s. The fonds contains one series of textual materials and another of photographs, which show people, place and events of significance to his life.