The collection consists of records created by the Assiniboine Historical Society. The records include, photographs and other historical documents from the Brandon area; meeting minutes; financial records; correspondence records; heritage publicati...

The Kally Kennedy fonds includes a newspaper article (1985) and photographs (1986).

The collection consists of two photographs of the Dutch citizens presentation of tulips to Brandon and a photograph of Brandon's Centennial baby in 1982.

The collection contains five "The Mentor" periodicals dating from 1918 to 1920; used at Central School, The Canadian Teacher periodical, and documents related to the Westman Oral History Association's "Voices of Yesteryear&quo... 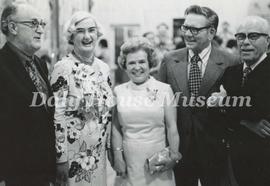