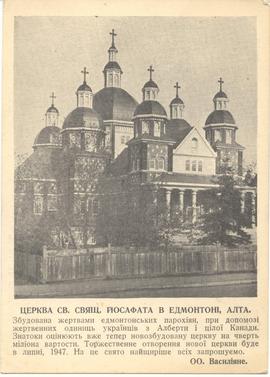 "St. Josaphat, the Holy Martyr Church in Edmonton, Alberta, built by the generous donations of the Edmonton parishioners and with the generous support of individual Ukrainians from Alberta and all of Canada. This church has currently been valued at a quarter of a million. The solemn opening of the church will take place in July 1947. Everyone is invited to attend." 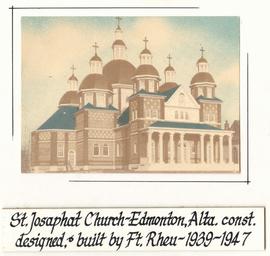 "THE UKRAINIAN CATHOLIC CHURCH of St. Josaphat in Edmonton, Alberta, Canada. It was constructed in the years 1939-1947, blessed and opened for public worship on June 3rd, 1947 by His Eminence Eugene Cardinal Tisserant from Rome. The estimated value is $250,000." The church, later a cathedral and a provincial heritage site, was designed and built by Father Ruh. 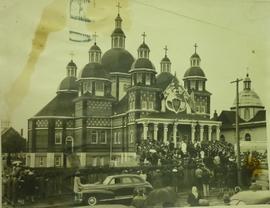 St. Josaphat’s Ukrainian Catholic Church, with a large crowd on a rainy day. The church was designed and built by Father Ruh. It was begun in 1939, designated a cathedral in 1948 and eventually declared a provincial heritage site. Father Ruh appears to be standing at the foot of the stairs, slightly right of three other priests wearing a cassock and stole.

The Larry Hayden fonds includes newspaper articles (1974) and a photograph (1974).