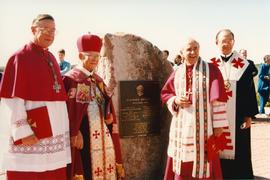 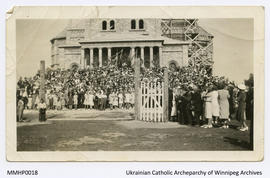 Blessing of the Crosses

Blessing of the Cross at St. John the Baptist Ukrainian Catholic Church, Cook's Creek, Manitoba, 1938. The home parish of the architect, Father Philip Ruh, OMI, the church was renamed the Church of the Immaculate Conception of the Blessed Virgin Mary in 1952. The photo shows the church under scaffolding, with a large crowd present for the ceremony. Black and white print is in fair condition, with creases. Metropolitan Maxim Hermaniuk has written "Cook's Creek, Man" in ink, in Ukrainian on the back.

This fonds includes the minute books, financial records (1886-1955), attendance registers (1887-1906), and related documents of the Blyth School District, Rural Municipality of Cornwallis. Aside from attendance records, the fonds contains documents relating to issues of teachers salaries, attendance policies, and holidays. 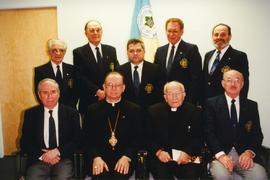 This fonds contains a pamphlet written and published by C.J. Barnes titled Seventy Years in Southwestern Manitoba. The pamphlet contains an account of life in rural southwestern Manitoba from the 1880s through to the 1940s.The pamphlet is based on a variety of sources including diaries written by Mr. Barnes' father. Fonds includes some hand-drawn maps not included in the published version of the pamphlet. This collection also includes four letters c.1962 between C.J. Barnes and Rev. Robert Harvey in his capacity as a columnist for the Brandon Sun.

The fonds consists of four series covering its major activities and its own administrative and research records, and includes textual records, photographs, posters, newspaper clippings, audio- and videocassettes and related material. 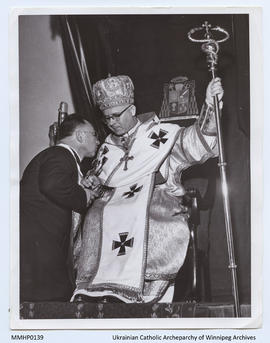 Canonical Erection of Metropolitan See, I

Metropolitan Maxim Hermaniuk is seated on the High Place at the Holy Table of Sts. Vladimir and Olga Cathedral, Winnipeg, Manitoba, holding the Cross to an unidentified religious, who kneels and is about to kiss it. February 12, 1957. Details of the event are written in ink on the back of the print in Ukrainian. 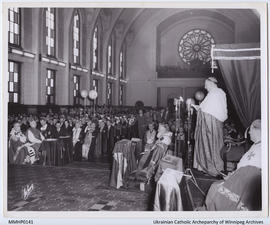 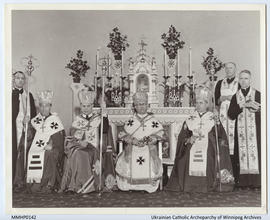