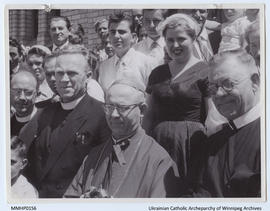 Metropolitan Maxim Hermaniuk, as Apostolic Visitor for the Sacred Congregation for the Oriental Churches, on his Australian Tour, in the centre of the photo, at St. Christopher's RC Pro-Cathedral, Canberra, Australia. Reverend J. Bowden, CSsR, appears at the far left edge; Reverend N. Kopiakiwsky, CSsR, is at the right edge of the photo. Metropolitan Hermaniuk has written in black India ink on the back of the print. From MMHP Album 2, no. 69. 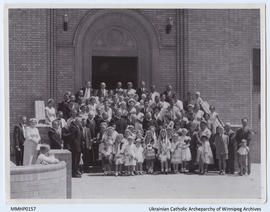 Metropolitan Maxim Hermaniuk, as Apostolic Visitor for the Sacred Congregation for the Oriental Churches, on his Australian Tour, standing in the centre, with the local Ukrainian Catholic congregation, celebrating at St. Christopher's RC Pro-Cathedral in Canberra, Australia, January 25, 1958. From MMHP Album 2, no. 70. Metropolitan Hermaniuk has written in India ink in Ukrainian on the back of the print. 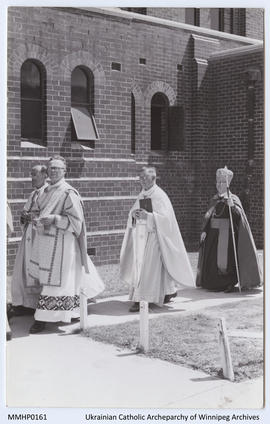 Metropolitan Maxim Hermaniuk, as Apostolic Visitor for the Sacred Congregation for the Oriental Churches, on his Australian Tour, in Sydney, at St. Joachim's R.C. Church. Reverend J. Bowden, CSsR, is on the far left, with Reverend N. Kopiakiwsky, CSsR, just in front of Metropolitan Hermaniuk, in procession with his crozier in hand. Metropolitan Hermaniuk has written in India ink, in Ukrainian, on the back of the print. From MMHP Album 2, no. 102.

The material includes the notebooks, theses, and study material produced and used while Father Maxim studied with the Redemptorists in Belgium, to obtain his Baccalaureate of Theology in 1940, his Doctorate of Theology and his Licentiate in Oriental Languages and History in 1943, and the Maitre Agrege En Theologie for his two theses in 1947. Most of the study notebooks have been stored in file cabinets in the Archives since the time of Nick Yakimishyn. A number of them, however, found in the large green trunk, have been boxed, listed and with the rest of the material from the trunk. Except for the theses themselves which are typewritten in French, most of the papers are hand-written in French.