The material includes the notebooks, theses, and study material produced and used while Father Maxim studied with the Redemptorists in Belgium, to obtain his Baccalaureate of Theology in 1940, his Doctorate of Theology and his Licentiate in Orient... 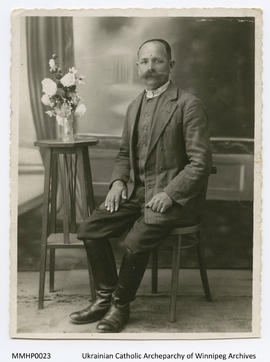 Metropolitan Maxim's father poses in a photo studio in this black and white photo postcard. Hand-written on the back, in Ukrainian: "Nove Selo, Mykyta Hermaniuk, born in 1880". At the time of this picture in 1936, he is 56 years old...

The series includes the theses written by Metropolitan Hermaniuk in 1947, as well as his contributions to newspapers and periodicals such as Visti, Obnova, Voice of Christ, Lover of Mankind, P.B. Louvain, Logos, Postup/Progress, the New Catholic E... 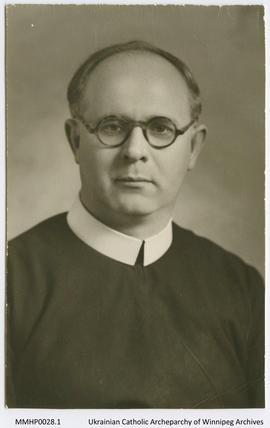 Portrait print of Father Maxim Hermaniuk, in his horn-rimmed eye glasses. One print is loose; two others are affixed to cardboard frame/folders. He has signed his name in ink in Ukrainian on the front of one print, MMHP0028ii. Unidentified locatio...