Photograph of a group of children swimming in the Assiniboine River at the 17th Street Beach, Brandon, Manitoba;18th Street bridge in background.

Photograph of female employees from A.E McKenzie Seed Co. on strike. The image shows a group of women picketing down Rosser Avenue in front of Clement's Drug Store, holding signs that read: "One toilet for seventy girls," "A.E. McKenzie unfair to labor," and "No rest period."

Aerial photograph of Rosser Avenue and 10th Street. Pictured businesses include the Olympia Café and the Bank of Montreal. 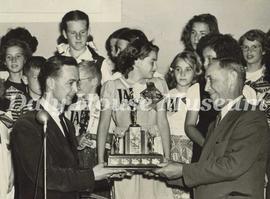 Photograph of two men presenting a trophy to a young girl at Alexandra School with a group of students in the background. One of the men is identified as Principal W.A. Wood.

Photograph of an unidentified group on the south side of the Assiniboine River at Third Street, Brandon, Manitoba. There are women canoeing, children swimming, and men sitting and standing on a dock. The man standing on the dock on the right side maybe "Tramp Kelly". The First Street Bridge is in the background. 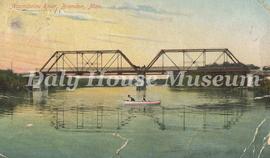 Hand-coloured photographic postcard of the Brandon First Street Bridge over the Assiniboine River. Two men are pictured in a canoe. Note on the back addressed to Mr. Ernie Arscott. 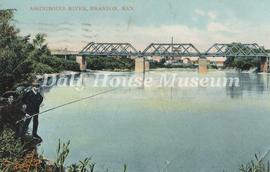 Hand-coloured photographic postcard of the First Street Bridge over the Assiniboine River in Brandon, Manitoba. A man and woman are pictured fishing to the left. There is a note of correspondence written on the back of the postcard. 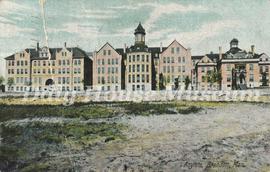 Hand-coloured photographic postcard of the Brandon Asylum buildings. There is a note on the back addressed to Mr. Earnie Arscott in Killarney, Manitoba. 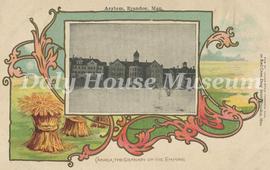 Postcard with inset photograph of the Brandon Asylum surrounded by a picture of wheat and the words "Canada, the Granary of the Empire."