Series documents Alfreda Attrill’s genealogy and family heraldry and includes birth dates and places or baptismal dates and places, dates of death, occupations, information on family crests, coats of arms and badges. The series consists of correspondence, notes on the Attrill family, a blue print of a family memorial plaque, as well as a family tree which traces five generations of Attrills from Alfreda’s parents to their great-great grandchildren.

Series consists of a certificate of service, photocopies of diplomas, and handwritten notes by Alfreda Jean Attrill on her certifications. 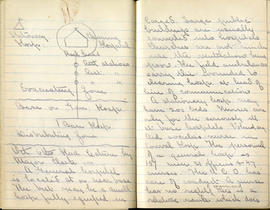 Series consists of three journals written by Alfreda Jean Attrill. Records include an account of events of the year 1914, a five-year journal which records important dates and milestones, as well as From Day to Day with Kipling, an edited collection of Rudyard Kipling’s poetry. The book of poetry has been included in this series as it has been treated as a diary by Miss Attrill, who has noted important dates in the book.

Series consists of correspondence, medical reports, and photocopies of a statement of service in the Canadian Armed Forces, attestation papers and a description of enlistment. The photocopies were obtained by a relative of Alfreda Attrill from Public Archives Canada (now Library and Archives Canada).

Series consists of handwritten accounts providing biographical information and anecdotes pertaining to Alfreda Attrill’s life experiences, including her childhood, her education, professional experience, travels, her involvement with the Red Cross, and her wartime experience.

Series consists of two subseries of records. The first subseries consists of inventory lists compiled in a notebook which records dishes, furniture, decorative items and personal items. An undated menu for an ordinary diet table is also included. The second subseries consists of original records related to Alfreda Jean Attrill but not created by her and includes correspondence from the Nursing Sisters’ Association of Canada and the Winnipeg General Hospital.

The series documents Alfreda Attrill’s wartime experience and honours as a nursing sister and consists of her decorated uniform, nursing and correspondence tools and artwork by Miss Attrill.

Series consists of postcards and photos documenting Alfreda Jean Attrill’s wartime experience and travels in France, England, Egypt, Malta, and Macedonia. Also included in the series are photos of Manitoba and Ontario, as well as photos of Miss Attrill's gravestone. Believing that no one knew her life better than herself, Miss Attrill provided the information pertaining to herself and her family for the monument before her death.