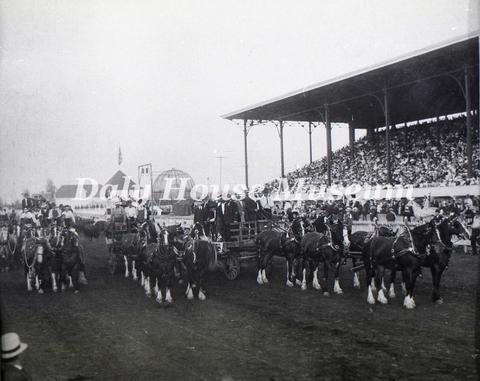 The grandstand was built in 1913 for the Dominion Fair. The Fair was held in Brandon from July 15 to 25, 1913. Close to two hundred thousand people attended the event.

The Brandon Sun was established in 1882 by Will J. White. After White’s departure, the newspaper was operated by a board of directors until 1903, when the majority of its shares were purchased by J.B. Whitehead. J.B. Whitehead took full control of the paper in 1911 and ran it until his son, Ernest Christie Whitehead, took over in 1937. The Whitehead family owned and managed the Brandon Sun until 1987 when it was sold to Thompson Newspapers. As of 2001, the paper has been owned by FP Canadian Newspapers.

Donated to the Daly House Museum by the City of Brandon in 1977.