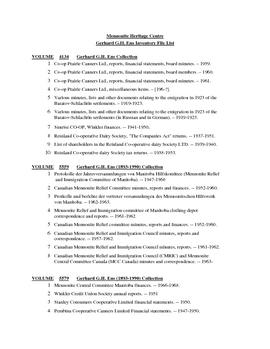 Gerhard G.H. Ens was born October 31, 1893 in the village of Nikolaipol, of the Jasykowo colony in south Russia to Gerhard Ens (1867-1949) and Margaretha Rempel (1871-1955). Shortly after the birth of Gerhard the family moved to the village of Gnadental in the Baratov Colony. Here Gerhard grew up and received his early education. He traveled to his birth town for higher education at the Zentralschule. Here Ens also was baptised and became a full member of the Mennonite church. During the Great War he performed alternative service serving in the medical corpse.
After the war Gerhard Ens took a teaching job in the colony of Arkadak where he stayed from 1917-1920. On September 26, 1921 he married Helena Sawatzky (1893-1994) and together they had eleven children. During the years 1921-1923 Gerhard devoted much of his time to the emigration effort on behalf of the residents of the Baratovo Colony. The family immigrated to Manitoba in 1923. Upon arriving in Altona, Manitoba, Ens found work with several farmers of the area. Soon the family was reunited with the larger Ens clan settling in nearby Reinland. He became a founding member of the Blumenorter Mennonite church and the Reinland Jugendverein. He served many years as the recording secretary as well as Sunday school teacher, and sang in the village choir
In response to the 1930s depression, drought, and collapse of the church-run Waisenamt, farmers sought other ways to ensure financial stability through the power of collective buying and selling. Jacob J. Siemens was at the forefront of the Cooperative movement that saw cooperatives formed across Western Canada. Gerhard Ens was active in a number of cooperative ventures. These included CO-OP Prairie Canners Ltd., Sunrise CO-OP, Winkler, Reinland Co-operative Dairy Society Ltd., Pembina Cooperative Canners Limited. Ens also served in para-church organizations such as Bethel Hospital Society, Winkler, Mennonite Sanatorium of Manitoba (Eden Mental Health), Canadian Mennonite Relief and Immigration Council, Manitoba Hilfskomittee (Mennonite Relief and Immigration Committee of Manitoba), and the Mennonite Collegiate Institute (MCI). He was also an occasional correspondent to Der Bote. In his roles Ens usually took the role of secretary or treasurer. A number of Ens’ children also followed his example, becoming teachers and community leaders, such as Gerhard, Adolf, Henry, Helen, Abe, and Werner. Gerhard G.H. Ens died in Winkler on July 2, 1990.

This material has been deposited with the archives in at least two separate occasions. Photos of the MCI were deposited in 1987 and some papers came via Ens’ son Adolf in 2011. The Mennonite Collegiate Institute materials have been filed with the institutional fonds.

This collection consists of minutes, reports and financial records from many of the organizations Ens worked with and shows the populous support for the cooperative movement and for relief work in the Mennonite communities in Southern Manitoba.