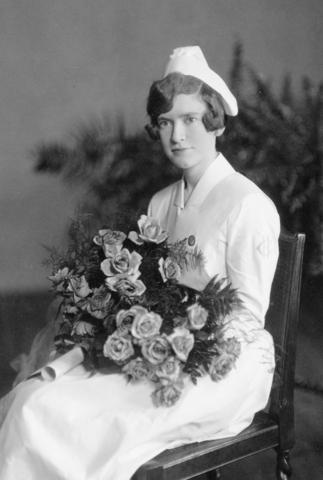 Edith Evelyn Turner was born on 18 March 1907 in Abernethy District (Saskatchewan) to Austin Edwin and Mary Ann Turner, on 18 March 1907, and graduated from the Children's Hospital of Winnipeg School of Nursing in 1929. On graduation she joined the nursing staff of the Winnipeg General Hospital on the Children's Ward (K Flat) where she worked as Head Nurse for 25 years.
During this time she designed, and was awarded a U.S. Letters Patent, for the SIMPLEX Nipple Sterilizer which was distributed through Fisher & Burpe Limited, a Surgical Instruments Company.

In 1959, when the pediatric ward of the Winnipeg General Hospital was closed and all children went to the Children's Hospital, she became supervisor of orthopedics, neurosurgery and gynecology. In 1962, she moved to the Nursing Office where she worked as a Nursing Supervisor, Assistant Director and finally, Staffing Co-ordinator. Although she officially retired on 1 September 1975, she continued to volunteer as an advisor to the Director of Nursing. Edith Evelyn Turner died in Winnipeg on 1 December 1999.

The records of Edith Evelyn Turner were donated to the Archives of the Nurses' Alumni Association of the Winnipeg General Hospital/Health Sciences Centre by Garry and Jeanette Kirk (Miss Turner's Nephew) in April 2000. A second accrual (to the HSC Archives/Museum) occurred in November 2012.

No further accruals are anticipated at this time.