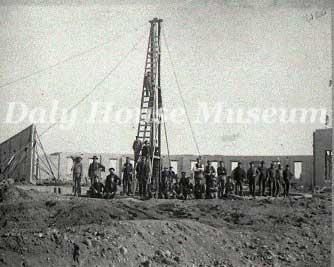 John Hanbury moved to Brandon in 1882 and began working as a builder and contractor. In 1892 he started a business manufacturing doors and windows. In 1898 He purchased the Assisinboine Lumber Company's Brandon Mill. By 1901, he had established the Manitoba Hardware and Lumber Company which employed about 200 workers.

Frank Henry Gowen was born on November 1, 1877 in Wiltshire County, England. He apprenticed with a photographer in London before immigrating to Manitoba. Around 1905, he opened a photographic studio in Brandon, Manitoba. He also worked other photographers in Brandon including Bryant’s Studio and Davidson Brothers. By 1911, Gowen was also operating a branch of his photography studio at Wawanesa, Manitoba. During his last two years in Brandon, he worked in partnership with Alexander Davidson as Davidson & Gowen. Gowen moved to Vancouver, British Columbia around 1913 and continued to work as a photographer until retirement in November 1945. He died at Vancouver, British Columbia on 3 February 1946.

Donated to the Daly House Museum by the Assiniboine Historical Society in 1978.