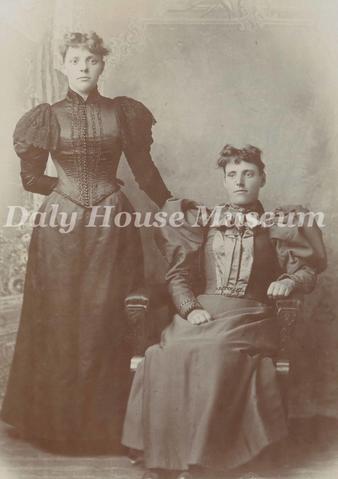 Donated to the Daly House Museum by William J. Birtles in 2000.

Photographed portrait of Ada and Annie Birtles against a studio backdrop.

Annie Birtles was born on September 24, 1874 in Yorkshire, England to Joseph Birtles Jr. (1853-1932) and Mary Bottom (1854-1904). She immigrated to Canada in 1883 with her parents and siblings. The family settled in the Alexander, Manitoba area. After her mother's death, Annie helped raise her younger sister Frances Ellen Agnes (1897-1981) and kept house for the family. Annie was also an organist for the Anglican Church. She passed away in 1960 at the age of 85 and is buried beside her sister, Frances at the Alexander Cemetery.